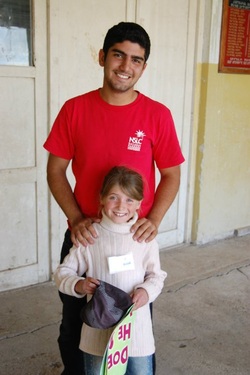 Over the Hills and Far Away

When my sister, Nanor, told my family that she was planning on spending an entire summer halfway across the world building a computer lab in a village that no one even in the world had heard of, it was safe to say that we were quite skeptic and doubtful. Over time, more pieces of this giant puzzle started falling into place. When eleven college students agreed to join the Hidden Road Initiative and the Straus Foundation granted HRI with $10,000 for the project, her dream slowly started becoming a reality.

A lot of the work had been done by HRI before all the team members had reached Armenia. Through liaisons acting as the eyes and ears of HRI, they completed remodeling an old leaky school room to a white-walled and fully carpet computer room. When we saw the completed room, it was quite empowering and encouraging to reassure ourselves that this project is actually going to work!

Over the next two weeks, we spent our days working, teaching, communicating, hiking, and even learning some village life skills. Most of our days were spent in the classrooms of the school running classes for the children every day from morning till afternoon. I was assigned the gym class where they we played many types of sports and game such as volleyball, ping pong, chess, and etc. It was a big learning experience for me to figure out how to reach these kids; they weren’t too fond of games at first. As days started growing by faster and faster, the kids and I started growing much closer than I had predicted. It was extremely hard telling them goodbye since they were trying to find me a woman and keep me as a husband in the village.

In retrospect, I just started realizing how much I’ve started to miss that village in the hills where the main road is shared by humans and cows alike. I know this summer was not the last time we shall visit Akhpradzor because there is much work to be done. This summer was only laying the foundations for future projects. We shall return to Akhpradzor, sooner than later.
Powered by